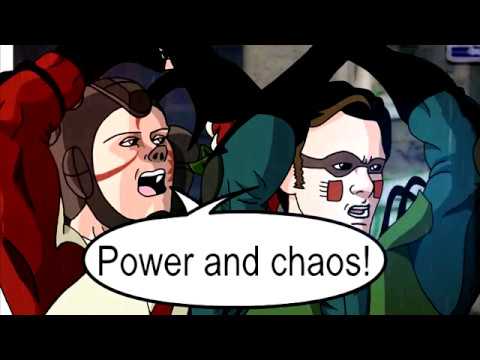 Episode 1 of The Tribe: Reboot project, a modern motion comic adaptation of the post-apocalyptic television series.

"In the pouring rain the LOCOS chase - and gun down - a rival tribemember, cementing exactly why they are a force to be feared. Meanwhile, LEX, RYAN and ZANDRA keep to the safety of the sewers as they try to figure out what to do. They soon come across an abandoned shopping mall that seems to be locked up, encountering JACK.

Elsewhere the young kids - CLOE, PATSY and PAUL - begin to realise that they may have been abandoned by SALENE. As AMBER and DAL lament on the past, TRUDY reveals to BRAY her desperate situation. Just how would ZOOT and EBONY react to the news?"

I finally had time to sit down and watch this!

Dean’s drawing skills are phenomenal. The eyes on these characters look lovely, and with all that makeup on them , it must have been a tough job.

And - can I just say that while The Tribe was a show inherently anti-violence, I am intrigued to see the more - dare I say gritty? - approach to the series, because yes, in an apocalypse, things do get ugly.

Hope and survival may triumph in the end, but there’s also a lot of the other stuff happening.
So kudos and I’ll keep waiting for next episode!

P.S. - Lex smoking? He darn sure would. And L+R toting guns is pretty believable as well. They went through the boot camp, they’d scavenge for some, first thing after the society goes down.

Many thanks for the kind words guys!

Dean is definitely an amazing artist and I am constantly telling him so. He really captures the essence of the characters and none of this would be even remotely possible without him. I am so glad that he spared time to be able to draw these assets for us.

I completely agree. We knew that this scenario is exactly what Ray must have been facing when shopping the reboot / movie idea to Hollywood. The show’s core themes rebel against violence, so its inclusion can really throw things for a loop! How can the two marry? … But we hope that though this alternate version of events does include weapons, violence and stuff not able to be included in the original show, we really didn’t want to lose the themes of what makes it ‘The Tribe’. That tribal-ness, that coming together and keeping everyone’s dreams alive, we hope will still rise above everything else.

Lol. And that was one of the very first things I wanted to do with Lex!

Again, thanks for the positive response everyone!

Really looks great. Though maybe some of the sounds could be a bit quieter because the rain in the beginning and the sounds of the swings were so overpowering. But really great work

good job. love the kind of drawning ( the faces and mimcis !!)